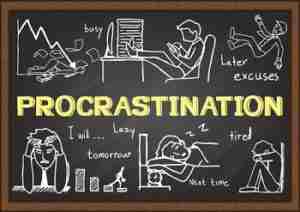 A client had a challenge at work and it could only be fixed by having what was likely going to be a an uncomfortable conversation. While he knew it had to be addressed, he’d been putting it off longer than he liked.

Sounds normal. When you have to do something unpleasant, the natural inclination is often to put it off.  But my client figured something out.  He realized that he was putting it off in the hope that he’d figure out a way to make it easier.  Brilliant observation – and also, he admitted, highly unlikely.

When you procrastinate, maybe your expectations isn’t so optimistic thinking the task will eventually be “easy.” Perhaps you just want it to be less hideous, or uncomfortable, or boring, or time-consuming.

But if that thing will continue to be hideous, uncomfortable, boring or time-consuming, here are some ways to forge ahead in spite of that…