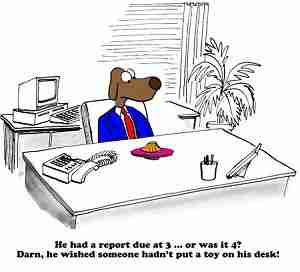 We’ve all been there.  Putting things off that need to be done. It can be a big thing like getting in shape.  Or a small thing like writing a proposal. You know you’ll feel better if you get started or better yet, get it done but instead of launching into it you either busy yourself with (relatively) unimportant but less distasteful tasks, or make 38 excuses for why starting later will be just fine.

So by procrastinating you DOUBLE your crummy feelings.  You still have the dread of the project or task but now you also have the guilt from procrastinating.  Yeah, that stinks.

So perhaps instead of putting it off and feeling worse.  Work for just five minutes on this task.  Just five minutes. After that you can move on to something else or reward yourself.  But you know what will probably happen, is that once you get started you’ll keep going for a little while and get more done than you thought.