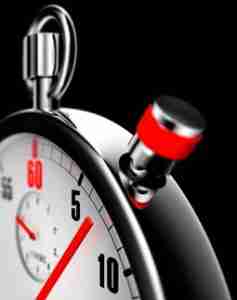 Right now.  Before you read the rest of this post, stop and count to seven the way we used to as kids.  One one thousand, two one thousand, and so on.

Did it seem like a long time? Short amount of time?

Counting it out always makes it feel like more time than I imagine it to be.  Whether it went quickly or more slowly than you may have assumed, it’s pretty astounding what can go through your mind in seven seconds. No?

And that’s why you need to take action before those seven seconds kick in. These times include the moment you decide to…

I call this the Seven Second Syndrome. In those seven seconds you can come up with a myriad of excuses for why doing that thing later makes sense. Or why doing something else, even if it might not be as important, is a better choice.

Don’t fall prey to the Seven Second Syndrome! Beat the seven seconds to the punch and just get started before the brain tries to talk you out of it. Once you’re into the task for a few minutes it’s rarely as awful as you imagined.

Should You Always Forge Ahead?

There are instances when waiting the seven seconds is the smart thing to do. For instance…

This is called the Seven Second Save.

Seven seconds sounds like an insignificant amount of time.  But look at the difference it can make!