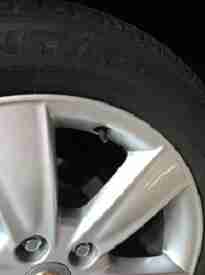 Take a moment or two and think about a task you’ve been putting off. Something that you think is going to be difficult, or take forever, or be scary to do, or has the potential to make someone unhappy with you if you don’t do it.

I had never put air in my own tires because I didn’t know how.  Wasn’t sure how much air should go in there. Was afraid the tire might explode if I did it wrong, etc. So when a tire was low it became a much bigger deal than it needed to be.  Since gas stations are “pump your own” there’s no helpful, uniformed guy to take care of it.  I would count on the kindness of strangers or my brother or hope that I only needed air whenever some other service was being done.

Yesterday that all changed when I noticed that my tire was frighteningly low.  My father-in-law mentioned it last week and I chose to ignore it for all the reasons I mentioned above – and then I forgot about it. By yesterday it was so low I was really worried as I drove to a station with an air machine. But after 36 years of driving and never putting air in my own tires even when it caused me much grief not to do so, I managed it this time.

And it was no big deal. Nothing exploded. The air machine was extremely user friendly.  (Though 75 cents for air registers high on the “are you kidding me?” scale.)  All those years of all that consternation. For what?

Hopefully whatever the thing is that you thought of at the beginning of this post hasn’t been bugging you for 36 years. But it’s quite possible that it, too, will not be nearly as big a deal to do as you think it is.  What IS a big deal is all the mental energy we spend thinking about this thing instead of actually doing it – thereby making it worse than it ever had to be.

So today just do that thing you thought of at the beginning of this post.  Gut your way through it if you must, but forge ahead. You may even inspire others to take on their dreaded task as well. Doubling the good outcome as you cross something off of your list and help others do the same.