Meditation isn’t what I thought it was 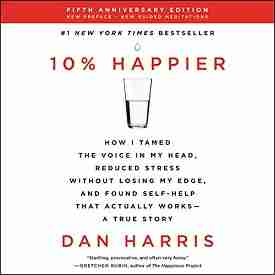 I’ve tried meditation off and on for over a decade, but had never been able to make a consistent practice stick. I’m not certain what’s different about now, but something is.

It started when I read 10% Happier by Dan Harris. He’s a successful, competitive, cynical yet funny, sometimes hard-edged reporter for ABC who, after having an on-air panic attack, turned to meditation. I liked him instantly because he didn’t approach meditation with a “group hug in the harmony hut” mentality.  I could relate to him.

Reading the book was followed by listening to the podcast of the same name. And pretty quickly, purchasing the app. Now a veritable a sponge trying to learn all I can – time to sit, meditate and essentially, chill, is a vital part of the day.

One of the most startling things I’ve learned this go-round is that meditation correctly does not mean clearing your head. In fact, having a thought during meditation and noticing you’re having that thought is success. What’s being practiced is not hanging onto the thought. Have the thought, notice that you are thinking, let it go, and focus on your breath. Repeat dozens or hundreds of times in a session.

It’s astounding how many thoughts go through my head that, to quote Joseph Goldstein, “aren’t useful.” Ruminating on something I can do nothing about isn’t useful. Thoughts that are worries aren’t useful. Being angry or insulted isn’t useful.

Thinking about how much discomfort I’m in isn’t useful. Though I’ve also learned that if I focus intensely on the source of the physical pain, it dissipates. That blew my mind.

If you don’t like the results you’re getting, you have two options. Either change what you’re doing and get different results, or change how you feel about your current results.

Letting go of non-useful thoughts falls into the second option in that philosophy. It’s not easy, which is why they call it a meditation practice. Just like your golf swing, public speaking ability or cooking skills – consistent practice reaps results and rewards.

Thoughts are developed in our own heads and we can choose to make them stick around and mess up the day or let them float away. Doing a bit of meditation doesn’t have to be a big deal.  I suppose you could say overthinking it isn’t useful.

Ideal Worklife Strategy Session
PrevPreviousWhy I gave up the idea of a Norman Rockwell Thanksgiving
NextHow do you tell a colleague or employee they need a coach?Next